For Republicans, ‘Crisis’ Is the Message as the Outrage Machine Ramps Up

With next year’s midterm elections seen as a referendum on Democratic rule, Republicans are trying to create a sense of urgency and diverting focus from their own divisions.

WASHINGTON — House Republican leaders would like everyone to know that the nation is in crisis.

Pressed Tuesday on whether the nation is really so beleaguered, the No. 2 Republican in the House, Representative Steve Scalise of Louisiana, thought of still more crises: anti-Semitism in the Democratic ranks, “yet another crisis,” he asserted, and a labor shortage crisis.

“Unfortunately they’re all real,” he said capping a 25-minute news conference in which the word “crisis” was used once a minute, “and they’re all being caused by President Biden’s actions.”

As Americans groggily emerge from their pandemic-driven isolation, they could be forgiven for not seeing the situation as quite so dire. They might also be a little confused about which of the many outrages truly needs their focus: the border, perhaps, but what about Dr. Anthony S. Fauci and the Wuhan lab leak theory, the teaching of critical race theory in the nation’s schools, the fact that some schools are not fully reopened, Representative Ilhan Omar, or all those transgender athletes competing with biological girls in high school?

But for divided House Republicans, outrage may be the tie that binds — at least their leaders hope so.

“Look, our main crisis is we’re not the majority — that’s our top crisis,” said Representative Tom Cole, Republican of Oklahoma.

House Republicans, still overwhelmingly in the thrall of Donald J. Trump, have learned over the last four years that grievance, loudly expressed, carries political weight, especially with their core voters. Mr. Trump certainly did not teach members of his party how to express anger over perceived injustices; many of them had been doing it for years. But the House Republican leadership has shifted to Trumpian expressions of outrage since the days of former Speaker Paul D. Ryan, a self-described “policy guy” with a happy-warrior image, and the backslapping bonhomie of his predecessor John A. Boehner.

There is a method to all the remonstrance. Representative Elise Stefanik of New York, who took over as the message maestro of the Republican conference after the banishment of Representative Liz Cheney, hatched the crisis strategy as one of her first ventures, Mr. Cole said, distributing talking points this month on the perils facing the country.

The idea is that with Democrats in control of the White House, House and Senate, next year’s midterm elections will be a referendum on one-party control, not on Republican governing plans, said Mr. Cole, a former chairman of the House Republicans’ campaign arm. The Republicans, at least this early in the political cycle, need to seed a sense of instability, overreach and fear, he said.

The strategy is also predicated on the adage that the best defense is a good offense. By focusing on an array of real or imagined disasters, Republicans avoid addressing the crisis in democracy created by Mr. Trump with his efforts to nullify the election, which he continues to stoke. On Tuesday night, 21 House Republicans voted against awarding congressional gold medals to the Capitol Police and other law enforcement officers who protected them when a mob of the former president’s supporters stormed the Capitol on Jan. 6.

David Winston, who has long worked with congressional Republicans on polling and messaging, said every new president faces an early challenge, and how he responds helps cement his image with curious voters. Republicans tried to make that early challenge the surge of migrants — including unaccompanied children — at the border.

But there is a risk of throwing up too much chaff, he said. And eventually, Republican leaders are going to have to find a theme, like former Speaker John Boehner’s groan-worthy “Where are the jobs?” mantra. Its repetition might have annoyed reporters, but it was effective with voters.

Republicans have long been better than Democrats at imparting a sense of crisis. They made Solyndra a household name, with heated news conferences, accusatory hearings and angry statements, when the solar company went bankrupt and left the Obama administration — and the taxpayers — the bill for a $535 million federal loan guarantee that was part of Barack Obama’s economic rescue plan. This week, an electric pickup truck plant in Lordstown, Ohio, midwifed by Mr. Trump, lost its top executives, its prototype burst into flames and it is on the brink of collapse — with hardly a Democratic peep.

The deadly terrorist assault on Benghazi became a two-year ordeal for Hillary Clinton, thanks to the Republican outrage machine, while a botched military raid ordered by Mr. Trump in Niger, which left four Americans dead, has largely been forgotten — even after Mr. Trump fumbled the name of one of the dead and told a grieving widow her husband “knew what he signed up for.”

Brad Woodhouse, a veteran Democratic operative, said some in the party had wanted to “Benghazi” the Niger raid, but, “It’s just not who most of the Dem Party and Dem Party leadership is.”

“I guess you can say we don’t gin up phony crises, but I don’t think that’s a bad thing,” he added. “At some point, the public turns back to what they think is reasonable leadership.”

Democrats have not been able to get the same traction even on the Capitol riot, which aimed to stop the official awarding of a presidential election to its victor, in part because Republican antics and accusations have disrupted hearings on the assault.

Part of the Republican advantage is just a sheer will to muscle through, regardless of Democratic incredulity. One of this week’s outrages is Mr. Biden’s supposed weakness before President Vladimir V. Putin of Russia, a “crisis” that seeks to send four years of Mr. Trump’s deference to the Russian leader down the memory hole.

Veteran House Republicans say they have a traditional message to impart.

“I think the biggest contrast right now with the Biden-Pelosi agenda is their goal to control from Washington so much of your daily life, from your paycheck to your health care decisions to everything else,” said Representative Kevin Brady, Republican of Texas. “We stand for the opposite. We want to create more freedom for individuals with lower taxes, a stronger economy and a safer nation.”

But that message has been lost amid a constantly shifting menu of crises and outrages. At the state level, Republican legislators have obscured very real efforts to curtail voting access by spotlighting cultural issues like blocking transgender athletes from high school competitions — something that impacts virtually no one — or stopping the teaching to children of “critical race theory,” a graduate school framework that explores how racism is infused in American institutions.

But a drumbeat of cries for Vice President Kamala Harris to visit a southwestern border in crisis gave way to accusations that the nation’s gasoline supply was nearing collapse, which then subsided amid demands for the firing of the government’s leading virologist, Dr. Fauci, and an investigation of the theory that the coronavirus was engineered in a laboratory in Wuhan, China, then released on the world.

Last week, the target of Republican outrage was Ms. Omar, after a tweet she posted that appeared to equate the actions of Israel and the United States with the human rights abuses of Hamas and the Taliban. Representative Kevin McCarthy of California, the minority leader, called the tweet anti-Semitic — though it did not mention Jews or Judaism — and threatened to try to remove Ms. Omar from the Foreign Affairs Committee, an action they have yet to take.

Republicans are also pressing their case that the push by some progressive Democrats to “defund the police” has led directly to a very real surge in crime facing the nation’s cities.

It can get difficult to keep up with all the catastrophizing. On Tuesday, minutes after Representative Michael McCaul, the lead Republican on the Foreign Affairs Committee, warned of a foreign policy crisis in Europe, Mr. Scalise said, “I don’t know if Vice President Harris understands the crisis is not in Europe, it’s at America’s southern border, and she and President Biden created it.”

There are plans to put together some Republican policy proposals. Mr. McCarthy has assembled seven task forces: jobs and the economy; Big Tech censorship; the “Future of American Freedoms”; energy, climate and conservation; American security; “healthy future”; and China. Representative Cathy McMorris Rodgers of Washington, who leads the big tech task force, said the panels will take a year to come up with legislative and policy responses to take into the midterm elections.

“The goal is to be ready on Day 1,” should the Republicans take back the majority, she said.

For now, even Republicans who have been critical of their leaders say they have time to formulate an agenda beyond the outrage machine they are eagerly feeding. Representative Chip Roy, Republican of Texas, noted that Newt Gingrich’s Contract with America really didn’t emerge until September 1994, two months before Republicans’ resounding midterm sweep.

“There’s night-and-day difference between Republicans and Democrats, say, on border security, where we’re fairly united that we need to secure the border, and I don’t think they care,” he said. “We’re watching small businesses unable to hire people because they’re paying people more not to work. We’re pretty united on those key differences. Thematically bringing all that together and how you message that the American people, I think that’s something you work on.”

As for the Democrats, most simply don’t think the crisis talk is working, beyond spinning out clicks for right-wing media outlets and Facebook algorithms.

“President Biden, for all this angst, including Dr. Seuss and Mr. Potato Head, has a plus-eight approval rating overall, a plus-four on the economy and a plus-28 approval on the economy,” Mr. Woodhouse said.

As House Republican leaders were leaving the stage on Tuesday, Ms. Stefanik wanted to reiterate for one last time the state of a nation on the brink.

“Thank you so much for embracing our effective messaging,” she told a small clutch of reporters, sitting in socially distanced seating. “America is in crisis.” 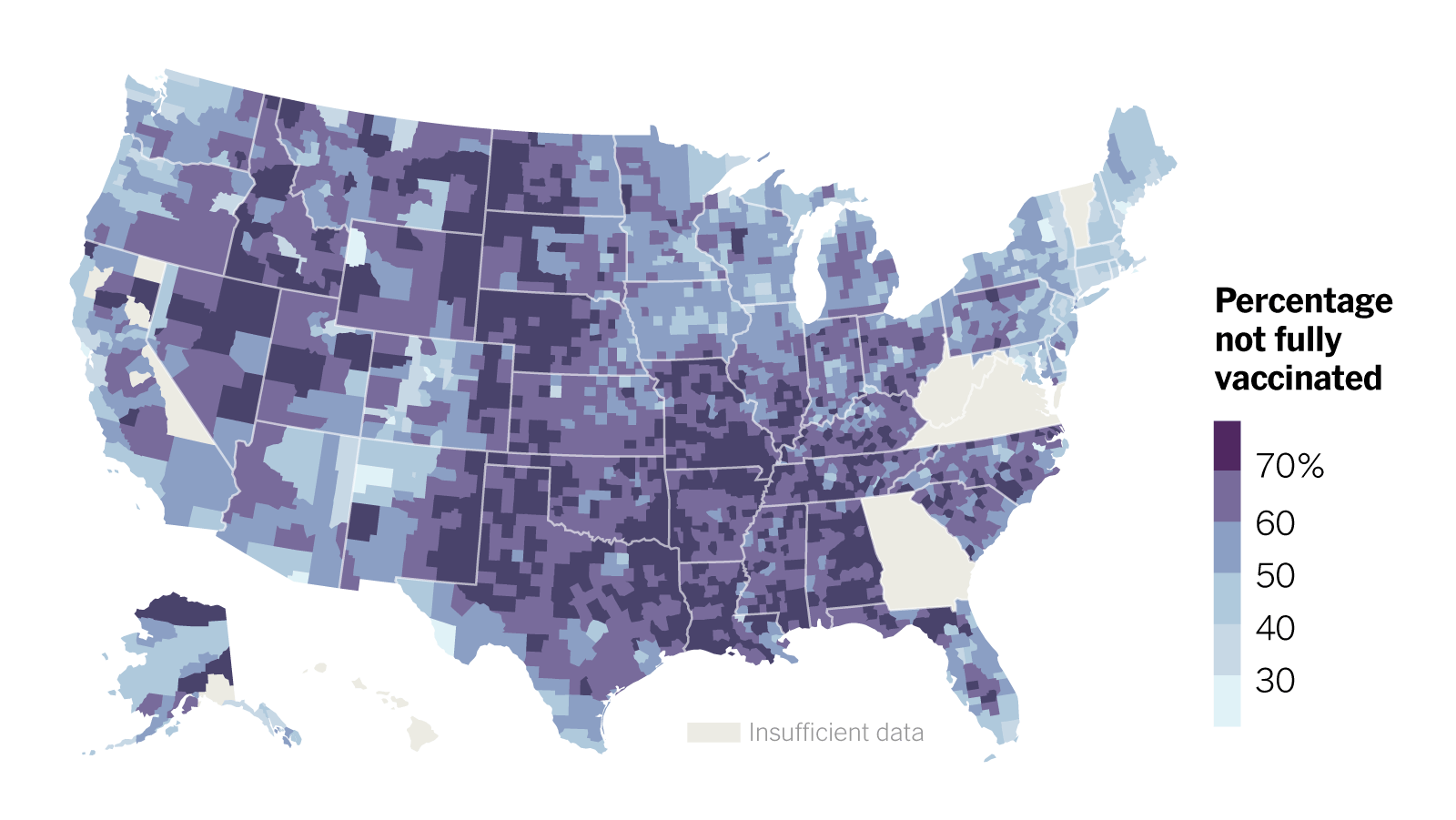